Watching the documentary Fantastic Flesh The Art of Make-Up FX an idea came to me. When  auteur theory was being developed by film theorists and critics way back when in the 20th century its aim was to have film directors recognised as the true authors of a film even though film production was both a collective and industrial process. Despite these factors the true auteurs voice, style and thematic concerns could, so the argument went,  be discerned in any of their works. I had the idea that this article would present a complex theory of the special effects artist as auteur but on reflection thought it would be more fun to celebrate the work of Screaming Mad George, and watch a bunch of videos of cool special-effects on the way.

Some context wouldn’t hurt though. So it is interesting to consider which special effects artists have become more well-known to the public than others. Certainly other effects artists could recognise certain work. In  Fantastic Flesh Tom Savini (see below) describes going to see films featuring the work of favoured effects artists as, “the lastest exhibit from your favourite artist”. A potted history might start with Jack Pierce (featured in this 1933 issue of Modern Mechanics!). Pierce was in the fortunate position of being head of Universal’s make-up department when that studio inaugurated the first horror film boom of the 1930s. Counting Boris Karloff’s instantly iconic make-up as Frankenstein’s monster and Lon Chaney Jr.’s The Wolf Man (both below) among his creations, Jack Pierce could arguably be said to be the granddaddy of special effects auteurs. In the Fanatstci Flesh documentary dire ctor Frank Darabont describes Pierce’s Frankenstein make-up as, “as iconic as the Empire State Building”. Difficult to argue with that really. 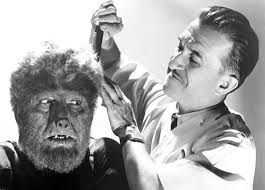 Jack Pierce working on his Wolfman 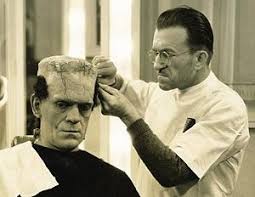 And working on the Monster

Here I’ve already muddied the waters though. Because Pierce was make-up artist on what perhaps remain the most famous iterations of these monsters, but does this make him a ‘special effects’ artist? Ought we to lump Pierce’s special make-up effects in the same category as, say,  Douglas Trumbull‘s effects for 2001: a Space Odyssey or Close Encounters of the Thrid Kind? And even if we broaden our definition whose Frankenstein are we really talking about? Jack Pierce’s because he designed it? Boris Karloff’s because he performed it? Or is James Whale our classic auteur by dint of directing it? If Pierce is not quite the special effects auteur we are looking for he still possessed the hallmarks of a true artist. According to Fantastic Flesh Pierce was fired from Universal for taking too long to perfect his work.