Laughter on the Outskirts is coming!

On Friday the 15th of February, 2013 the world trembled as Laughter on the Outskirts made it’s world premier at the Leicester Comedy festival. A rough beast, slouching towards Edinburgh to be born. Over the course of an hour the charming enigma wrapped in a riddle wrapped in a mystery wrapped in human flesh and skin Woodward and I said things with our mouth-holes and moved our meat-sacks around to entertain the audience. Paradigms were shattered, unthought ideas were thought, the falcon could not hear the falconer, and mere anarchy was loosed upon the world.

At the very least people chuckled and no-one died.

So that was good. I am excited to see how it develops over the course of the Edinburgh Festival in August. That’s right, I said it! Woodward and Jeffery: Laughter on the Outskirts will be playing there every day. More details to follow, but it can’t hurt to start spreading the word now can it? Come along, all of you! It will be free too!

In the meantime I wanted to use this post to talk about jokes. Specifically my joke about the French philosopher Michel Foucault. Not immediate comedy gold, granted. But I was pleased to see th joke finally work properly. or how I’d always imagined it would work in my head even though it never necessarily did. 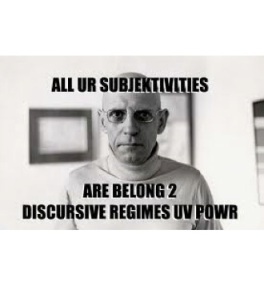 Foucault if he was texting you

So this post will either be an interesting and entertaining consideration of the mechanics of comedy or painfully solipsistic self-examination. Potentially both. But, if you are still with me, I’ll continue. If you’re not with me then I can’t say I blame you, so instead here is a link to a youtube video of giant anconda regurgitating a  cow. It’s pretty amazing.

Anyway. Below is a video of the first time I tried the Foucault joke. I’m putting it there for illustration purposes rather than it being integral to this post. Advance warning: all of this material was new at the time so some of it is painful and doesn’t work at all and I occasionally draw attention to its newness in an irritating manner.

So the “Foucault bit” as I will henceforth call it, basically worked (I say ‘worked’, I really mean ‘seemed funny to me’) because it takes something profane, base, and childish-a story about the time my mum shat herself in front of me-and then at the end of the routine, after talking about Foucault’s notion that what society calls perverse or deviant is in fact political in nature, there’s a call-back to my Mum’s poo with the line, “and I realised that my mum didn’t just shit herself, she actually delivered a scathing critique of bourgeois morality”.

For the record, my mum is very proud of me.

Anyway, being convinced that this was somehow amusing I’ve been consistently proven other wise. Especially one particular Red Raw night at The Stand in Glasgow when around two minutes of a five minute spot were eaten up by me clumsily, and not very entertainingly, explaining Foucault so that by the time I got to the final minute and the callback it was too late and most of the crowd had, quite rightly, decided that they didn’t want a condensed lecture about a dead French, homosexual, post-structuralist at a comedy club. I also like to think that this is the reason The Stand have never invited me back as that is in fact the least paranoid of my  list of imaginary reasons why The Stand has never invited me back.

So now then…the Focuault bit didn’t work, despite my belief to the contrary. So I decided that maybe it did work but it was question of form. It didn’t work in a five or ten spot because the time it took to set up the Foucault bit, which it seemed to me had to be a) accurate (or what was the pint) b) because of that, just complex enough for the juxtaposition of philosophy and poo to be funny. But also c) funny because its accurate: Foucault was interested in that kind of thing.

The 20-25 minutes afforded by Laughter on the Outskirts turns out to be the best fit. I had a couple of minutes of material that followed the Foucault bit as a climax but since it worked as it was supposed to, (bizarrely getting a round of applause) it felt okay just to leave it there. two years of writing my five-minute bits as if they were all thematically connected in some way seems to have paid off in the form of twenty minutes that are both (usually/often/sometimes/never) funny but also tell a story that’s autobiographical and philosophical.

And if that sounds awfully wanky, and it surely does, then remember that it’s also mostly jokes about poo.

And with that we come to an end. I’m away to work on my Deleuze and Guattari routine.

See you in Edinburgh in August! In the meantime I will be here:

Hello humans. I am Dr. Scott Jeffery. I do the following things (in no particular order): Research into Post/Humanism and Transhumanism and superheroes (seriously, I’ve got a PhD and everything) Stand-up comedy Compulsive rumination I blog about these things (plus occultism and all kinds of other lovely, strange topics) at NthMind. I also write regular short film reviews at Filmdribble. I can be contacted via twitter (@sjzenarchy) or at sjzenarchy@gmail.com. END_OF_DOCUMENT_TOKEN_TO_BE_REPLACED
This entry was posted on Monday, February 18th, 2013 at 13:59 and tagged with Comedy, Deleuze and Guattari, Foucault, Stand-up comedy, Video and posted in comedy, stand up, Uncategorized. You can follow any responses to this entry through the RSS 2.0 feed.
« Joke Writing and the Exquisite Corpse
Thesis Review Part One: Assemblages and Rhizomes »

2 responses to “Laughter on the Outskirts is coming!”