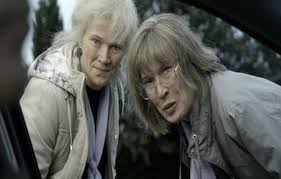 As Richard Metzger quite rightly points out over at Dangerous Minds (which led me to the video, thanks DM!), “Although there is nothing untrue in the above synopsis, don’t think for a second that you know what this piece is about…” This is a dark, dark show. Hilarious certainly, but bleak. And bleakly hilarious is a rare and pleasing juxtaposition.

As always, context. Jessica Hynes (nee Stephenson) was part of the team behind the much-loved Spaced (along with Simon Pegg and Edgar Wright) and the fondly remembered (by those who remember it) Asylum which in retrospect seems like a hothouse of comedic talents who would later dominate the comedy landscape. Alongside Hynes, Pegg and Wright were the likes of David Walliams, Bill Bailey and a pre-Mighty Boosh Julian Barratt. Asylum also starred Norman Lovett, who apart from being Holly in Red Dwarf was/is also a none-more dry old-school alternative comedian. The whole series of Asylum can be found here at Norman Lovett’s website (where you can also find his great and strangely neglected BBC sit-com I, Lovett). The music for Asylum was provided by David Devant and his Spirit Wife who’s singer/spirit vessel Mikey Georgeson also performs as Mr. Solo. For no reason at all here are two videos from both of his personas. This post continues beneath.

The other half of Lizzie and Sarah is Julia Davis. Like her co-star/writer, Davis also hung within the same comedy constellation of 90s/early 2000s comedic achievement that Ben Thompson, in his highly recommended book Sunshine on Putty argues was the Golden Age of British television comedy. Davis made her way via the sketch show Big Train and Jam. This classic sketch from Jam features Davis and David Cann  (who also plays her husband in Lizzie and Sarah).

The morbid tone and subject matter of the sketches in Jam are also in evidence in Davis’s own self-penned work. She went on to co-write and star in Human Remains with Rob Brydon, which continued exploring the comedic potential of depression, denial, deviance and death. Here’s a clip from one of the sunnier episodes.

Human Remains nailed the sort of grimly naturalistic comedy being peddled by shows like The Office but upped the perversion and morbidity. In her sit-com Nighty Night, Davis took this even further. In my humble opinion (and I accept that many people love that show, including the tumescent biped, musical savant Craig Jeffery) Nighty Night was too broad, sacrificing some of the naturalism to up the grotesquery. Working with Hynes on Lizzie and Sarah seems to balance that out somewhat, upping the naturalism so that the grotesqueries seem all the more horribly real.

Hynes and Davis first worked together on a series of improvised sketch shows titled Peppatits for the independent radio station Resonance FM. An archive of the shows can be found here.  The characters of Lizzie and Sarah grew out of these improv sessions. Below is a clip from 2010 in which they perform the characters on stage. It barely hints at the abysses that the actual show was willing to gaze into.

The pilot originally aired Sat 20 Mar 2010 at 23:45 on BBC 2.  This graveyeard slot seems a deliberate move on the BBC’s part to ensure as little viewing figures as possible, giving it a convenient excuse not to have to pick up the series. Note that the BBC graveyard slot does at least have a proud history, particularly for American sit-coms. Seinfeld, The Larry Sanders Show and Arrested Development, all equally brilliant in their different ways, were shunted into the quiet hours. This damaged their general profile but did at least give an insiders feeling for those willing to seek them out and put the effort in to stay up on a school night (literally in my case). These series all got past the pilot stage of course. Lizzie and Sarah, sadly, did not.

According to the Guardian the BBC claimed that the slot was “the most appropriate time given the nature of the content and the target audience,” adding that fans were lucky to see it because, “We don’t always transmit pilots but in this instance we wanted to give fans of Julia Davies [sic] and Jessica Hynes an opportunity to see their most recent creative collaboration.” Presumably because there was no intention by the BBC of ever picking it up as a series. More’s the pity. Thankfully the pilot remains and it is easy to see what made the BBC back off like a big bunch of cowardly-cowardly custards.

In Lizzie and Sarah laughs are wrung from spousal neglect, infidelity, teenage death and murder. In the wrong hands this could have been the stuff of hard-hitting social realist drama. This is the story of suburbia’s lives of quiet desperation. Of the aching sadness, desolate loneliness, and infinite petty cruelties that lie waiting on the other side of your neighbour’s curtains. This is a show about forgotten women, women almost broken, worn down by the demands of an unwritten declaration that wives and mothers should keep calm, shut the fuck up and carry on. Make no mistake, Lizzie and Sarah is a feminist text. That word might have alienated some of you, but it shouldn’t. A) because you’d be a moron with a poor grasp of the meaning of ‘feminism’ and B) because Lizzie and Sarah fits quite comfortably into a genre of film and TV that takes in Thelma and Louise, and, in its purer, more deranged forms, Baise Moi and I Spit on your Grave. Its the punk feminism of grindhouse movies.

For all its naturalisitc trappings giving it the look of kitchen-sink drama this is really a female revenge tale played for laughs. All the men are horny, shallow, cruel, emotionally bankrupt bastards. But they have to be so that when the women finally turn on their menfolk there’s an undeniable kick to it. And if that sounds morally questionable, well it is. And it’s all the better for it. Trust me, you’ll chuckle at  murder and the humiliation of an Eastern European cleaner (“eat a shit toastie!”) without even giving it a second thought. At least, not until the show has finished.

Lizzie and Sarah is about as good as comedy can get. It’s funny because it’s true. It takes genuine horror and turns it into hilarity. This is alchemy: shit into gold. And if we will never get to see how the adventures of Lizzie and Sarah would have continued, well, let’s consider that our own shit toastie.

There’s also a facebook page campaigning to get Lizzie and Sarah commisioned as a series here.

Hello humans. I am Dr. Scott Jeffery. I do the following things (in no particular order): Research into Post/Humanism and Transhumanism and superheroes (seriously, I’ve got a PhD and everything) Stand-up comedy Compulsive rumination I blog about these things (plus occultism and all kinds of other lovely, strange topics) at NthMind. I also write regular short film reviews at Filmdribble. I can be contacted via twitter (@sjzenarchy) or at sjzenarchy@gmail.com. END_OF_DOCUMENT_TOKEN_TO_BE_REPLACED
This entry was posted on Monday, February 6th, 2012 at 12:53 and tagged with Comedy, Video and posted in cinema, comedy, musical savant Craig Jeffery, Uncategorized, video. You can follow any responses to this entry through the RSS 2.0 feed.
« Sina and the Man-Gods of the Homoverse
Holy Windows, Batman! Stained Glass Superheroes »